Nexquisite Entertainment is interested in SERIOUS INQUIRIES ONLY that can fill this position IMMEDIATELY. Please share this to others you may know that are qualified or tag others to this hiring promo.

If you would like to send your request in email format, please email nexent.org@gmail.com with the required information.
Nexquisite Entertainment 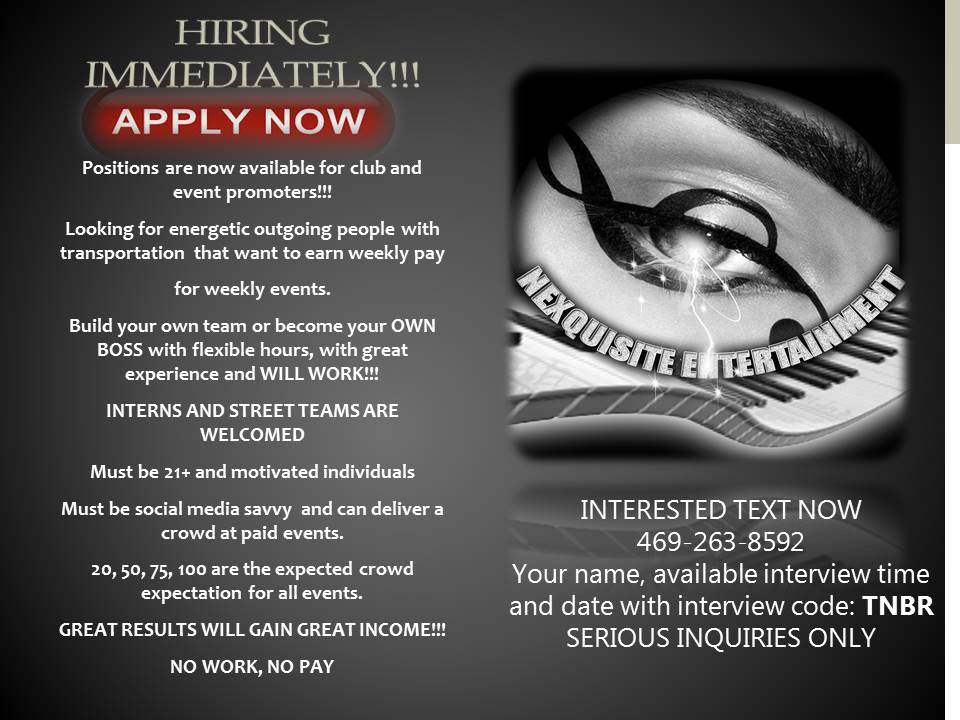 PRYME BAR IS OPEN ON FRIDAYS

You are invited to book your event at the HOTTEST Club in Dallas on a Friday night with UNLIMITED GUESTS of 1300+  LADIES FREE before 11PM?

PrymeBar is where you want to be on a Friday night from 9p to 3a, located at 10333 Technology Blvd, Dallas TX.

VIP Exclusive:  Receive a complimentary section for parties of 6 or more!! Free cover for everyone til 11:30p ONLY if you have purchased a section on a Friday night that is not an event night!  Seating is limited so text 469.263.8592 in advance to get locked in. Ask about the party packages before Fridays at discounted price and book your parties, anniversaries, celebrations and artist bookings by texting your name and date to 469.263.8592 of the requested party date and instructions will be sent to you accordingly.

A BRIEF HISTORY OF INDEPENDENCE DAY

Independence is declared; it must be maintained.
–Sam Houston, American politician (1793–1863)

The Declaration of Independence is America’s revolutionary Charter of Freedom and the document upon which the nation’s founding principles were established.

THE DECLARATION OF INDEPENDENCE WAS NOT OFFICIALLY SIGNED ON JULY 4

On April 19, 1775, during the Battles of Lexington and Concord (Mass.), the first shots were fired between colonists and British troops, starting the American Revolution. After these first military conflicts, tension between Britain and her American colonists continued to mount.

Finally, on July 2, 1776, the Second Continental Congress voted for independence from Britain.

Two days later, on July 4, the Congress approved the final draft of the Declaration of Independence, which had been written by Thomas Jefferson and edited by John Adams and Benjamin Franklin.

On July 8, the first public reading of the Declaration took place at the Pennsylvania State House (now Independence Hall) in Philadelphia, Pennsylvania. Later that same day, other readings occurred in Trenton, New Jersey, and Easton, Pennsylvania.

Printer John Dunlap made about 200 copies of the Declaration with the date of July 4. Known as the “Dunlap Broadsides,” these were distributed throughout the 13 colonies.

However, it wasn’t until August 2, 1776 that the Declaration was officially signed. John Hancock, president of the Congress, was the first of 56 delegates who signed this enlarged version, writing in big, bold letters. This Ning App is not visible to members on the Main page.

Nexquisite Entertainment is a business promotional company. Our mission is to assist your organization in remaining an independent source for our clients.  Nexquisite Entertainment has over 15 years of experience in the music industry. Whether you are a music artist, model or in the performing arts arena, we encourage the pursuit of your talent.

Nexquisite Entertainment commented on Nexquisite Entertainment's page NexEnt Promotions @ PrymeBar
"Who Ready for Find One Fidays @ Pryme Bar???? You are invited to book your event at the HOTTEST Club in Dallas on a Friday night with UNLIMITED GUESTS of 1300÷.  LADIES FREE before 11PM? PrymeBar is where you want to be on a…"
Aug 9, 2019

Carol Cox is now a member of Nexquisite Entertainment
Apr 25, 2019
Welcome Them!

Sir'Que is now a member of Nexquisite Entertainment
Apr 10, 2019
Welcome Them!

© 2020   Created by Nexquisite Entertainment.   Powered by